Today I want to write about a rather unusual device that was around for a pretty long time actually, but that I have never heard of before. I also did never encounter this device in the ‘real life’ server of this game. However, recently someone sent me a link to this device and I found it quite interesting. I’ve seen devices like the S7800b some years ago, but I think the concept of a tablet with built-in hardware controls just did not get very popular. I mean why should it? The buttons seem to distract you anyways when performing typical tablet activities like browsing the web or watching movies. And usually android games tend to be made for touch only devices, so is the JXD S7800b any good at all? Let’s find out!

If you look up the tablet with your favorite search-engine you will find that most people, ordering such devices, want to use them for emulating retro game consoles, which perfectly makes sense if you think about it. You can actually have a portable gaming platform, loaded with all your favorite games and emulators, that comes with a nice and big built-in screen. 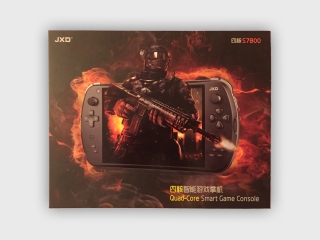 I wanted it to run at least the early Gameboy models (Everything older than the DS), N64 and PS X, so I looked up the best emulators for these consoles, which are:

ePSXe for Android – PS X
This is a rather popular one, you can also get it for many other platforms, like Windows, Mac and Linux, as well as iOs. It is not free, at least not on android, but you can, as always, pirate it. But I recommend you to support the developers, like I did, so they can keep up the good work. Trust me, it’s worth the money!
It works great with the tablet and even enables you to install plugins that enhance the graphics or sound. It has a ton of settings, you literally can customize it to the limit. It detects the controller automatically and saves game states when you end it, which is a handy feature.

Tendo64 – Nintendo 64
This one is actually free, but I think there is a premium version, to remove the ads. Nothing special to say here, it’s just a rock-solid emulator with all the features you’d expect from it.

NES.emu – NES
This emulator was the most expensive one I tested. But it works just fine. It also has a lot of settings (like ePSXe) and I’m very satisfied with it. It also saves game states when exiting and it doesn’t have a high power consumption, which allows you to play 8-10 hours with modest display brightness.

These were the emulators I tested, but there is one for literally each retro console, so you can give your favorite old games a revival!

I have to admit that I haven’t really tested anything from the play store, but PSX and N64 games play well. So I’ll just throw these Antutu benchmark results at you.

It scores 22.963 Points in total, compared to 63.599 points the iPhone 5S scores.
The different components scored:

So it turns out, that you can’t expect it to play the latest and prettiest 3D apps, which might disappoint you, if you’re into this kind of stuff. However all emulated 3D games I’ve tested worked perfectly fine.

Not quite vanilla android. The tablet came with some apps pre-installed. Some of them might be useful (like the emulator manager), but I didn’t use them at all. However I like the custom style android.

All the other things are just as you’d expect them. It’s android after all. It’s not quite my favourite but that’s personal opinion.

It’s ok. You can play about 6 hours (simple emulators) or surf the web for 8-10 hours depending on what you look at. So there’s nothing too special to say here I guess. It’s pretty much average.

Well is it any good then?

I absolutely love it. The thing I love most about it is the screen. It is so bright and works perfectly well for everything you do on the tablet. You can play old, new, good and bad games on it, as long as it’s not a complete fancy and new 3D game. You can watch videos or listen to music, surf the web, it will fit all your needs. It has a very good contrast and it is bright enough to look at it while you are outside. The performance is good for that price, the sound might be better though.

The hardware buttons the device itself are well made, however, the shoulder buttons are a bit flimsy, but not too bad. The only thing I really hate about it is the fact that the thumbpads spin in their pods. I noticed that pretty soon and it really annoys me, because when you try to push a thumbstick from the side, your finger slips away because the stick itself rotates. But other than that the D-pad is great and the buttons are well places, except they switched the A and B key on the controller, which means that you have to reconfigure each emulator.

The cameras on the tablet are both bad, but who would take a picture with his tablet anyways, so why bother?

In conclusion I can say, this tablet is one of the best (cheap) ones I’ve ever owned. It is quite fast at managing everyday tasks, good to look at, well built (even though it’s made out of plastic) and very cheap! So I can recommend you to buy this, as long as you don’t play with the thumbsticks a lot and as long as you don’t mind playing the latest and prettiest 3D games from the play store.

Warning: If you buy this tablet on ebay or funstock (where I got it from), you might end up without a charging adapter (because it ships with a UK-Style AC plug). You can’t charge it via micro usb, you have to use the proprietary connector!

I think it’s also worth to mention that I bought this tablet for using it as a remote control for some RC vehicles I built, but testing emulators and games on it makes sense, because they sell it as a gaming tablet.

So should you buy one?

If you are interested in emulators and want to have a proper gamepad and a good screen while you are on the go: yes!

If you want to play modern 3d graphic intensive games from the play store: no!

For surfing/mailing/facebook etc.: You could. But I’d say: no! You can find better ones, because the gamepad keys would be in your way all the time.