As most of you might have already heard, the chairman of the FCC, Ajit Pai, announced to revert Title II of the Communications Act from 2015, which allowed the FCC to regulate internet service providers (ISPs) and therefore forbid certain business methods, which might discriminate some service providers on the internet, which de-facto puts net neutrality to an end.

What is net neutrality?

The term means that service providers have to treat each data packet the same way, no matter where it comes from and where it’s destination is. This means that it makes no difference whether you head over to Facebook or check a local artist’s portfolio online, both connections are treated the same way. Neither one is more important.

Without net neutrality big providers can pay an ISP money to prefer their service over others, which might harm smaller businesses or services, that don’t have that much money. But it might also be the other way round: An ISP could ask a service provider to pay a fee to not get a slow connection, which again, smaller providers might not be able to pay.

Hey, but maybe it’s not even all that bad! Look at all that cool stuff you can still do on the internet:

You might ask. Maybe it won’t at all, but that’s quite unlikely. You might notice slower connections to less popular (whereas less popular means less popular than YouTube) streaming sites like DailyMotion or Vimeo. But it might also mean that you, as the customer, might have to pay more for even more popular streaming services like Spotify or Netflix, because these providers still want to make the same profit as they did before and they might make customers pay for their FCC fees. Maybe it’s only going to start with 0.10$ a month but that might even drastically increase over time, as there is practically no one there to regulate ISPs anymore.

However it could theoretically also happen that “politically incorrect content” might be completely blocked with an upcoming election or simply that sites, which have a critical point of view, might load slower.

It’s hard to tell at this point, especially for any other region outside the US, because these things have not begun yet, due to several lawsuits against the FCC’s decision.

Outside the united states

From obvious exceptions like the PRC and North Korea, where the “internet” is not neutral and free, I haven’t really heard about anything like this yet. Usually each country has (at least) its own regulations and laws, so it’s most likely up to each country to decide for themselves. But there are a lot of unfair offers around already. For example all the free-stream offers from several ISPs.

A free-stream offer means that when you stream a designated service, for example Spotify (here’s an offer [german text only] from one of the largest providers in Austria), you won’t spend your data volume and therefore you don’t have to pay for streaming these services, which obviously makes other providers, which don’t participate in this programme, less attractive to new customers.

My point of view

Maybe I have a very negative view on the whole situation, but at this point it’s really hard to tell what’s going to happen. But one thing’s sure: Both, ISPs and service providers on the internet, want to make as much money as they can. That’s their only goal as a company.

And it’s almost funny how the big players today could only get that big, because net neutrality was there, when they came to the market. I wonder if we would all still be using Yahoo! or MySpace, if these companies would have paid ISPs back in the days to keep Google and Facebook out of the business.

Now don’t misunderstand me, I don’t want to say that any of the mentioned companies are bad or evil or something. I enjoy using some of them myself, like Spotify and Google, which have achieved a lot by giving their customers what they want and not by blocking others out of the business.

With net neutrality possibly coming to an end, today’s big service providers make it even harder, if not entirely impossible, for new providers to arise, even if they might be better or offer their customers more functionality or simply a lower price, which is not, how proper market economy should work, especially not in a country, which is known for enabling anybody to become rich and famous with just one great idea and a ton of work and where so many great companies came to life in a shed or garage.

And if nothing else works, there’s still one option left: 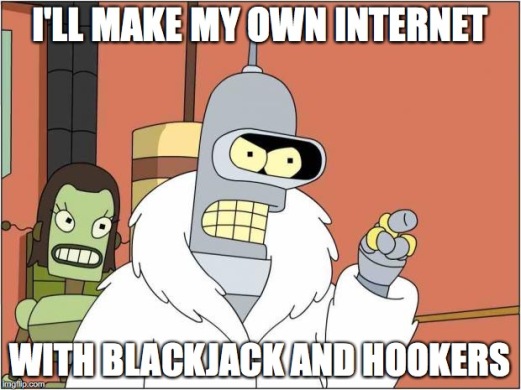 So, enjoy what’s left of your Sunday and hope you don’t mind a small rant from time to time!